Similar to merge sort, quick sort is embedded within the sorting primitives of many modern languages1. While, strictly speaking, its asymptotic complexity is inferior to merge sort’s, it often outperforms merge sort in practice. This is largely due to the fact that quick sort is an in place sorting algorithm while merge sort copies all the data to an entirely new memory location.

Sir Charles Antony Richard Hoare discovered the quick sort algorithm in 1960 while working on language translation software2. Mr. Hoare earned many prestigious accolades throughout his career including a Turing award in 1980 and the Kyoto Prize in 2000. His most memorable, some would say infamous, accomplishment is the conception of “NULL” values which he implemented for ALGOL in 1965. Since then, the majority of modern languages have followed suit. Mr. Hoare is quoted as classifying null reference errors as his “billion-dollar mistake”.

Another attribute that merge and quick sort have in common is that they are both examples of the divide and conquer algorithm design paradigm. Recall that this basic recipe consists of:

Consulting the pseudo code, lines 5 thru 7 account for step one of the recipe. The seconds step is accomplished with lines 9 thru 11. Owing to the operation of the partition method, the third step happens automatically. The partition method is the most complex piece, so it’s prudent to provide a more in-depth explanation.

partition accepts a list of data. The item located at index 0 becomes the partition point, also known as the pivot3. In a nut shell, it moves ordinally superior values in front of the pivot and ordinally inferior values after it4. The image below depicts a partition operation on a list of integers with a desired ascending sort order.

The important notion here is that partition does not fully sort the data. It provides three guarantees:

The implementation of partition is vital to the performance of the overall algorithm. Many sources employ an inefficient double loop, similar to insertion sort, due to it’s cognitive simplicity5. However, the only way to ensure that the overall asymptotic complexity of the algorithm conforms to the desired $O(n \log_2 n)$ (on average) runtime is to ensure that partition is linear ($O(n)$). Examine the pseudo code in conjunction with the animation below to understand how to properly implement partition. 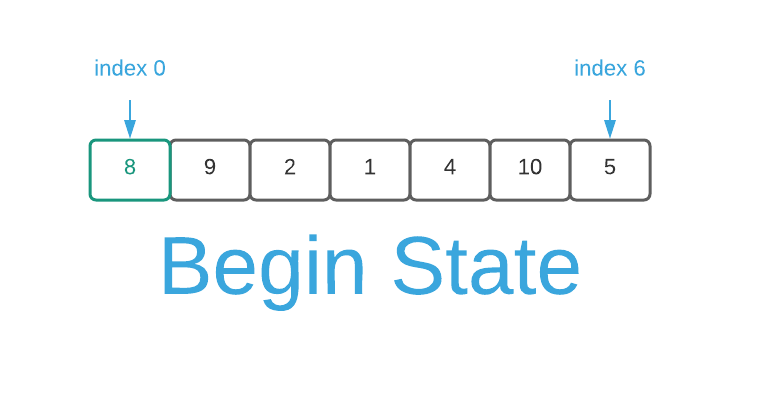 There is still one important detail that has been ignored to this point, that is the choosePivot method as shown in lines 40 thru 42 of the pseudo code. That is the topic of the next subsection.

The purpose of choosePivot is to identify the value in which to partition around. Lines 5 and 6 of the pseudo code describe its use. Removing those two lines has no effect on the end state. This begs the question, why use it? The answer is that it ensures a consistent runtime regardless of the ordering of the input data. This is a bit difficult to comprehend without examples.

First, consider the ideal scenario where the pivot element is always the median value as depicted below6. The asymptotic complexity is better than $O(n \log_2 n)$ in this case. As proof, first note that $n = 7$ meaning there are 7 elements in the list of data. Plugging $n$ into the runtime yields $O(7 \log_2 7) \approx O(20)$. So, the assertion is that the total number of operations is less than 20. partition is involved 3 times: once with 7 elements and twice with 3 elements. Assuming that partition is linear, that’s a total of 13 operations which validates the assertion. 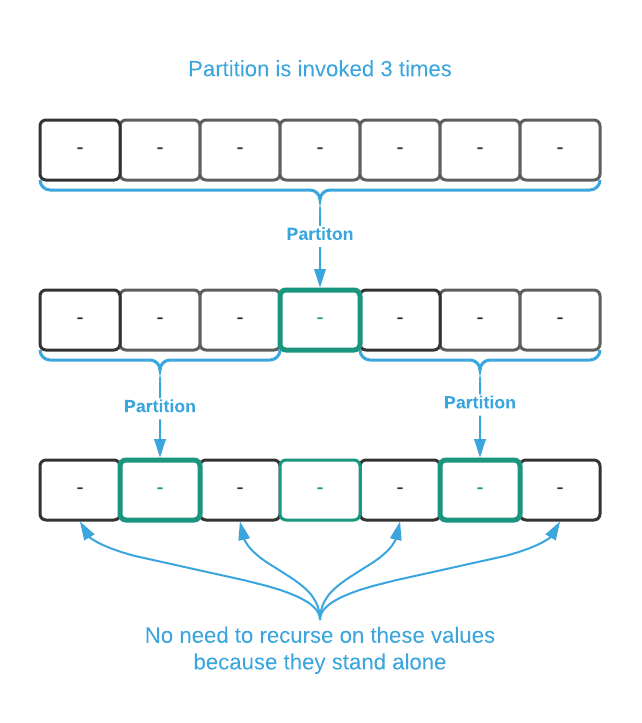 Now consider the other end of the spectrum where the pivot element is always the most ordinally superior value. Using the image below as a guide, partition is involved six times with input sizes of 7, 6, 5, 4, 3, and 2 for a total of 27 operations. That’s more than twice the number of operations in the previous example. 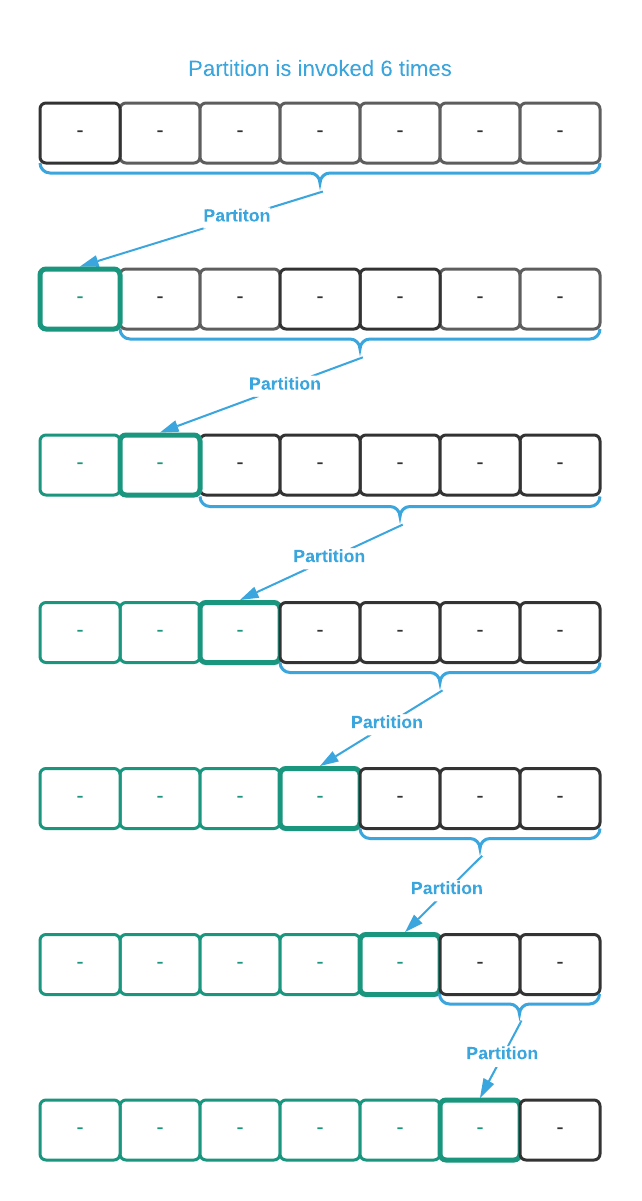 The next question becomes, is it possible to divine the median value? The answer is, unfortunately, no7. Determining the median is more computationally intensive than an inefficient sort. One solution is to partition on the first value (index 0). This is equivalent to removing lines 5 and 6 from the pseudo code. This works just as well as any other strategy if the input data is randomly ordered. The problem is that pre-sorted data results in the worst case scenario. Likewise, partitioning on last value (index $n-1$) has the same effect. Choosing the pivot element at random, as shown in the pseudo code, ensures an acceptable runtime regardless of the input data. In fact, it’s proven to result in a $O(n \log_2 n)$ runtime on average8.

To make this concept a bit more concrete, the data below compares the actual runtimes9 for sorting data with the following pivot strategies. 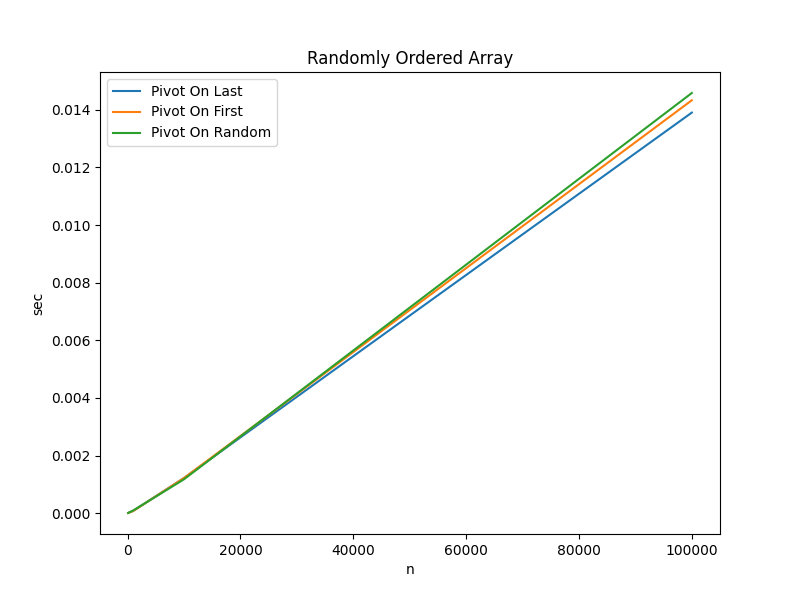 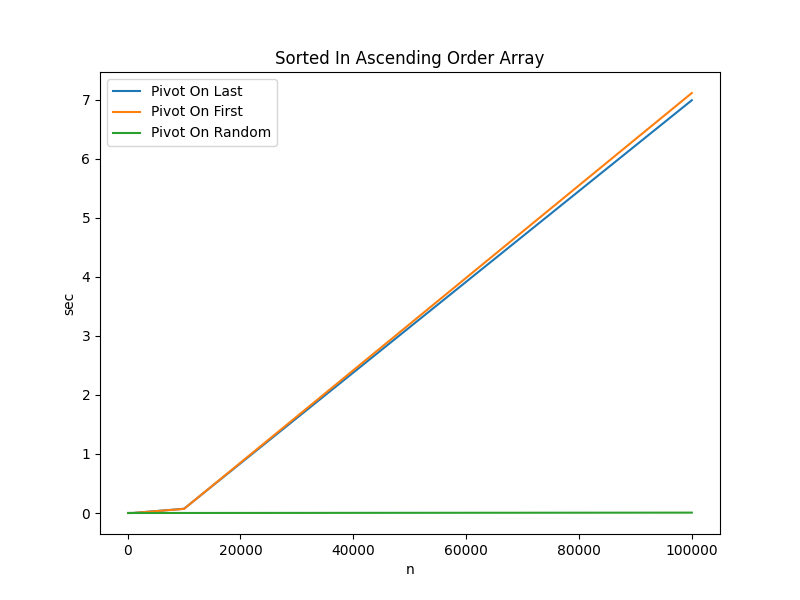 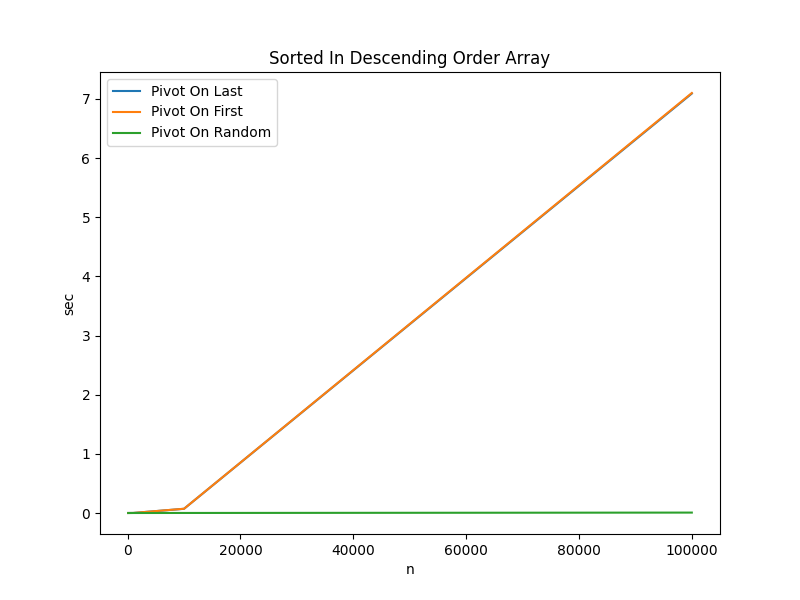 To bring this all together, the image below illustrates sorting a list of integers in ascending order using the quick sort algorithm. For the sake of brevity, it always pivots on the first item (index 0). Because the input data is randomly ordered, this isn’t detrimental to performance.

Notice lines 9 and 11 of the pseudo code. Essentially, what’s happening is a recursion on a portion of the input array. In many languages such as Python and ES6, it’s easy to create a slice of an array. For instance, line 9 may be written as follows:

There is a glaring problem with this approach. Creating a slice allocates a shallow copy of the array which is wasteful and has negative performance implications. A better approach is recurse on the existing array and specify the start and end index as follows: