The formal definition of the vertex cover problem is: given an undirected graph $G = (V,E)$, find the subset $V^\prime \subseteq V$ such that if $(u,v) \in E$, then $u \in V^\prime$ or $v \in V^\prime$ (or both). In plain English: find the smallest set of vertices in an undirected graph that include at least one end of each edge in the graph. The size of a vertex cover is the number of included vertices. Consider the example below: 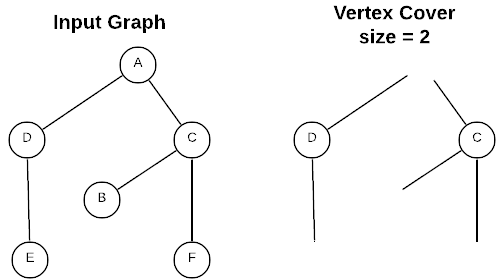 The vertex cover is the set \(\{D, C\}\) because that is the smallest set of vertices that includes at least one end of every edge in the graph.

Unfortunately, the vertex cover problem is $NP$-hard so it’s not possible to create an efficient algorithm capable of solving the general case. However, there are several reasonable approaches to the problem including: