Huffman codes are a popular means of lossless compression. The general idea is to assign binary codes to each character in a file. Compression consists of converting each character to it’s corresponding code (which is hopefully much shorter). The file is decompressed by preforming the process in reverse.

Before jumping right into Huffman codes, it’s advantageous to understand codes in general. First, consider fixed length codes. A simplistic code for the first four characters of the alphabet is shown below.

Another type of code is a variable length code. As the name implies, each code can have a different length. If shorter codes are used for the most frequently used symbols, the resulting compressed message is much smaller. Consider the code defined below.

Prefix-free codes make variable length codes useable. The concept is that no code is a prefix of another code. Consider the prefix-free code defined below.

Using this code, the string ABAD is encoded as 0100111 (7 bits). Decoding is now possible by using a binary tree. Simply follow the links in the tree and the first symbol encountered is the correct one. 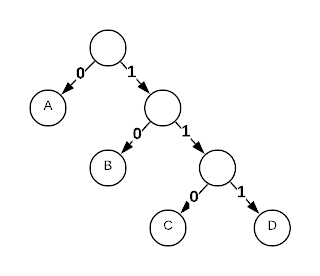 To find the average bits per symbol, sum the product of each code length by its frequency as shown below.

The Huffman code algorithm produces a binary tree that results in the minimum average bits per symbol for a given distribution of symbols.