Graphs represent pair wise relationships among objects. In graph jargon, the objects are known as either vertices or nodes. The relationship between the vertices are edges. Vertices that are connected via an edge are said to be adjacent to each other. To make the concept a bit more concrete, consider modeling one’s family as a graph. The people in the family would be vertices, and the relationships between them (mother, daughter, father, brother, etc..) would be edges. Edges are typically denoted by a pair known as the endpoints. If Dick is Jane’s brother, the relationship is denoted as $(Dick, Jane)$. The set of all vertices is denoted as $V$ and $E$ denotes the set of all edges. The degree of a vertex is the number of edges connected to it.

There are two types of graphs: undirected and directed. The edges of an undirected graph indicates a bi-directional relationship. $(A, B)$ and $(B, A)$ are essentially the same. See the example below. 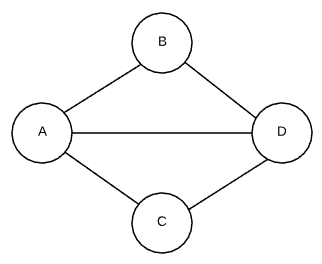 Conversely, the edges of a directed graph denote the direction of the relationship. $(A, C)$ indicates that A has a connection to C, but that does not imply that the reverse is also true. Continuing on with the family graph example, the brother edge $(Dick, Jane)$ indicates that Dick is Jane’s brother. However, Jane is not Dick’s brother. The end point of the relationship is known as the head while the origin is referred to as the tail. Some sources also refer to directed edges as arcs. See the example below. 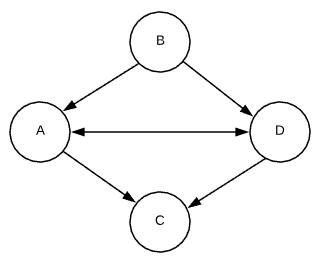 A bipartite graph (aka bi-graph) is a graph in which the vertices can be divided into two sets such that each edge connects a vertex in one set to a vertex in the other set. More formally, a graph $G = (V, E)$ is bipartite if it’s vertex set can be partitioned into two disjoint subsets $V = V_1 \cup V_2$, such that every edge has the form $e=(a,b)$ were $a \in V_1$ and $b \in V_2$. See the illustration below.

An alternate definition is a graph which there exists a cut so that every single edge is crossing it.

An important concept related to directed graphs is cycles. A cycle occurs when there exists a vertex that has a path that leads back to itself. An example is shown below.

A graph that does not contain any cycles is said to be acyclic. The term Directed Acyclic Graph is often abbreviated to DAG. 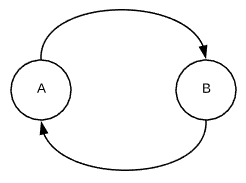 Edges can also have weights associated with them. Weighting assigns a cost to each edge. Weighting can be modeled in almost any way imaginable. In a network, this weight could be connection latency. Going back to the family graph example. Each relationship edge could have an intimacy weight. For instance, a spousal relationship may have a weight of 5 whereas a sibling relationship may have a weight of 3. See the image below. In this graph, the $(Janice, Richard)$ edge has a higher weight than the $(Jane, Dick)$ edge. 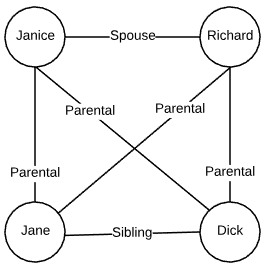 The minimum cut is the grouping of vertices into two non-empty groups having the fewest number of crossing edges. Consider the graph in the graphic below. There is no other way of dividing the vertices that would result in fewer crossing edges.

A Minimum Spanning Tree (MST) is the cheapest set of edges that connect graph vertices together. For instance, servers on a network or destinations on a road map. Stated differently, an MST is the sub-set of edges with the minimum possible sum of edge weights. A MST must satisfy two properties.

Based on the definition of a MST, the following facts logically apply:

The image below is a graphical representation of an input graph and its MST.

Conceptually, an Independent Set (IS) is comparable to the inverse of a graph. It’s a set of vertices that do not contain both endpoints of any edge. Consider a connected graph with only three vertices as shown below. There are five independent sets.

The [] (empty set) is always considered an IS because it technically fits the definition. The sets [A], [B], and [C] are also ISs because no edge contains only one vertex. The set [B, C] also qualifies because there are no edges connecting B and C. One important thing to note is that the number of ISs grows exponentially as the number of vertices grow. This has important algorithmic implications.

At first glance, this concept seems a bit academic; however, ISs are useful in practice. Finding an IS is a way of asking, which vertices do not have a relationship. For instance, if vertices are people and edges are familial relationship, an IS would define people who are not related.

There is only one path through the graph and each vertex is connected to the preceding vertex. By this definition, there will always be $n-1$ edges.

A graph with no cycles is said to be acyclic. A directed acyclic graph is particularly interesting because such graphs have a least one (usually many) topological ordering. A graph with a cycle has no topological ordering. While the goal of this project is to abstain from recondite mathematical definitions, this concept is much easier to understand in such terms. A topological sort is an ordering of vertices $v_{1},v_{2},…v_{n}$ in such a way, that if there exists an edge with a tail of $v_{j}$ and a head of $v_{i}$, then $v_{j}$ comes before $v_{i}$. It’s a ordering of vertices in which the directed edges of the graph always move forward in the ordering. Consider a graph in which the vertices represent tasks and directed edges represent precedence constraints. The topological orderings are acceptable sequences in which to complete the tasks. This is depicted graphically below.

Every directed acyclic graph has a source vertex, that is a vertex with no incoming edges. Additionally, there must exists a vertex with no outgoing edges known as the sink vertex. The interested reader is encouraged to contemplate why this is true…

There are several ways of representing a graph. Two of the most common are adjacency matrices and adjacency lists. The choice of which to use depends on graph density (sparse vs dense) as well as the desired graph operations.

For both cases, consider the graph below.

An adjacency matrix depicts vertices as indices across the top and side of a matrix. A one at the intersection of two vertices indicates a connected edge while a zero indicates no connection. The associated adjacency matrix for the graph in question is shown below. 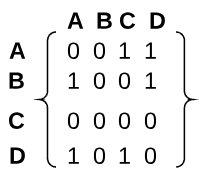 The amount of space required to store an adjacency matrix is $n^2$.

There are several different ways to create an adjacency list. However, the general concept is to have four components:

One common adjacency list representation is an array of linked lists. Each item in the array is a vertex. Each edge is represented as a link.

Depending on the application’s needs, keeping the vertices and edges in separate arrays may be more appropriate as show below.

Adjacency lists have lower space requirements than matrices. Additionally, they are optimized for graph search algorithms.

There are virtually countless applications for graphs. Below are just a few common uses.

All of the graph algorithms utilize this graph code which is located in the utils/c directory. This is a general purpose graph with an Adjacency List representation.