Red-black trees are one of the many strains of Self Balancing Binary Trees. It’s not practical to cover all variations owing to the breadth of topic. However, red-black balancing techniques are representative of the whole. A conception of this data structure will equip one with the mental tools necessary to pursue other alternatives.

As one might infer from the name, every red-black tree node has a red or black color designation. This is often confusing upon first encounter because it’s nonsensical to literally color a tree node. However, red or black is nothing more than a binary state designation1. It’s possible to replace red with pirate and black with ninja and achieve the same result. The intent is to store a bit on every node indicating one of two possible states. To solidify this concept, the image below illustrates the memory layout of a node from a red-black tree of 64-bit integers2. 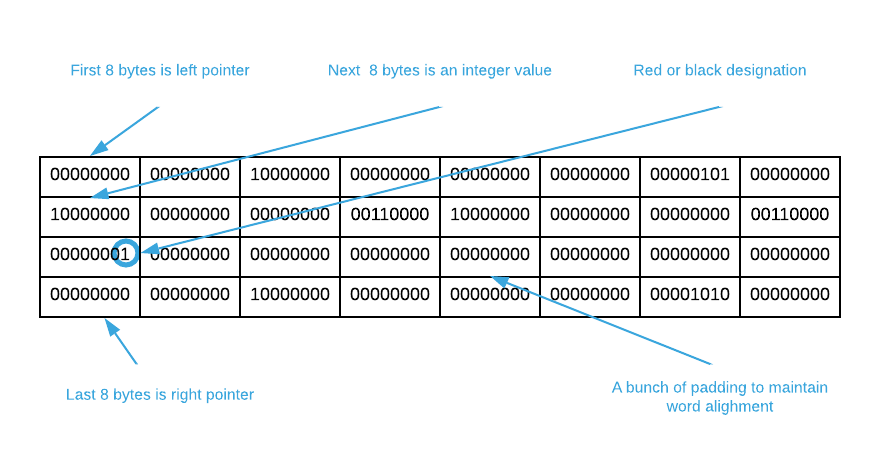 The Xerox PARC company is famous for many groundbreaking inventions3, the most notable of which is the Graphical User Interface (GUI). It’s not surprising that many algorithms also find their origins there. Two Xerox employees, Robert Sedgewick and Leonidas J. Guibas, published a paper in 1978 entitled A Dichromatic Framework for Balanced Trees4 which introduced red-black trees to the world. To borrow an aphorism from Issac Newton, Sedgewick an Guibas were “standing on the shoulders of giants”. They attribute much of their work to Rudolf Bayer’s 1972 paper entitled Symmetric binary B-Trees: Data structure and maintenance algorithms5.

As mentioned above, a red-black tree is a standard binary search tree that maintains additional invariants, four to be exact. They are listed below.

It’s not entirely obvious how maintaining these invariants minimizes tree height. Consider the simplest possible case: a tree with three nodes. It’s not possible to arrange the nodes in such a way that it is both unbalanced and also a valid red-black tree as illustrated below8. 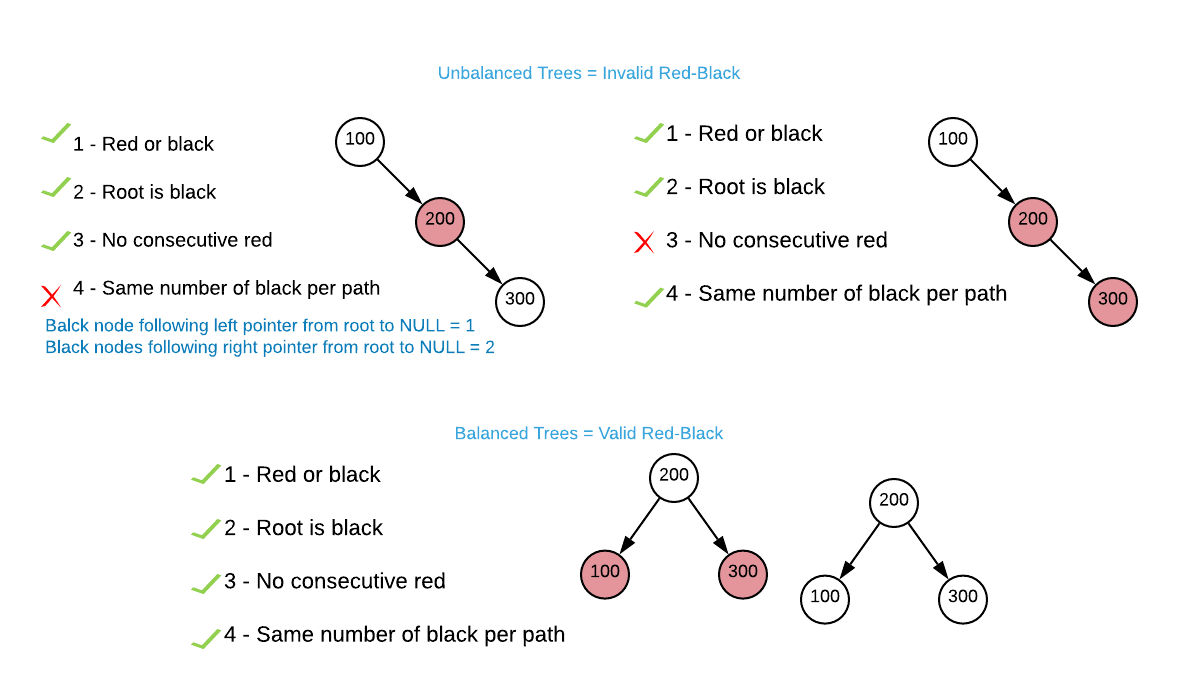 Every insert/delete operation has the potential to invalidate the invariants; therefore, they must be evaluated and restored. The sections below outline the exact algorithms is more detail, but at a high level invariants are restored via a series of recolor and rotation procedures. As an example, consider the insert operation depicted below. 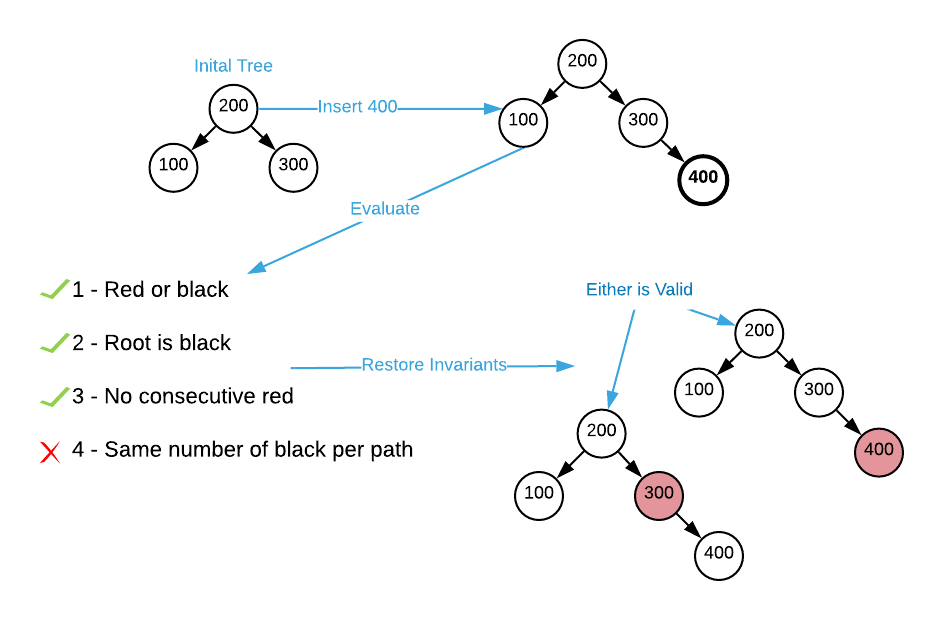 As the number of nodes increase, maintaining the invariants does NOT guarantee perfect balance. This may seems like a oversight but it’s actually a feature.

An interesting feature of red-black trees is that they do not attempt to maintain perfect balance. For instance, consider the two valid red-black trees depicted below. Both trees contain the exact same values and satisfy all invariants yet the bottom tree is more balanced than the top. 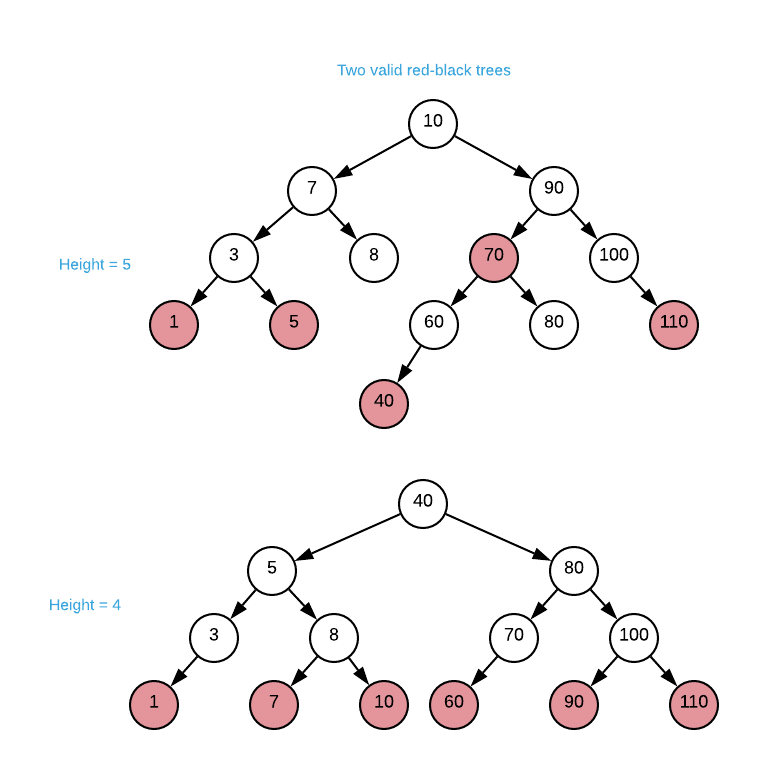 Stated a bit more intuitively, the maximum difference between the depth of any two leaves is one for a perfectly balanced tree and two for a red black tree. Next, we’ll examine an insert operation.

One could examine the pseudo or source code to understand red-black tree insert operations. However, they are a bit abstruse without some additional commentary. At a high level, the insertion algorithm has four steps:

The first three steps are self-explanatory while the fourth is fairly complex; therefore, it is the focus for the remainder of this section. Restoring the red-black invariants is a recursive process starting at the inserted node. For each node the algorithm encounters, there are three possible scenarios:

The actions taken for each scenario are outlined below.

Don’t worry if this seems a bit overwhelming. It’s normal to review red-black tree insertions several times before comprehension sets in. It’s also difficult to fathom without concrete examples. The image below steps through the process graphically.

In order to keep these concepts as accessible as possible, a few arcane details were omitted. However, the pseudo code as well as accompanying source code are rigorously complete and should be studied assiduously. With a firm conceptual understanding, the code should be much more accessible.

A red-black tree is direct replacement for any standard binary search tree; therefore, they have the same applications. Below are a few notable instances of red-black trees.

As mentioned above, the changes required to transform a binary search tree into a red-black tree are strictly additive. All of the binary tree pseudo code as well as the rotation pseudo code apply here and is not repeated. The additive code responsible for maintaining the invariants after an insert operation is shown below. The delete operation is an exercise.

Typically, trees terminate with a NULL pointer. Replacing them with a BLACK node representing a NULL value simplifies the logic. Without this, every node reference (left, right, parent, grandparent, uncle) must have branches to accommodate NULL values. The pseudo code above, as well as the supplied source code, implement a fifth invariant: all NULL pointers are BLACK nodes.

An added optimization is to create a single global NULL node to avoid re-allocating every requisite NULL node. This is depicted in the image below. 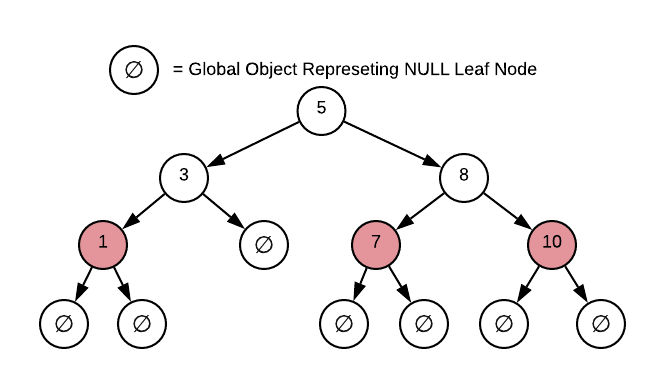