All the data structures covered to this point (stack, queue, and priority queue) have organized data to optimize retrieval order. This section expands our algorithmic toolbox to accommodate use cases that require locating data at will using a key value. For instance, consider an address book: a desideratum is to locate any contact by name. That is, locate data in memory using a key. A hash table, aka associative array1, hash map or dictionary, is perfectly suited to this purpose. What’s even better is that a hash table is capable of storing, deleting, and locating data in constant time ($\Theta(1)$)2. Many algorithms can be reduced to repeated lookups; therefore, the ability to perform a search in constant time is invaluable.

Hans Peter Luhn, an IBM engineer, is typically credited3 with the discovery of hashing4. He released a seminal IBM internal memorandum outlining the concept in 1953. He described placing data into “buckets” and calculating a bucket index by “hashing” a key value. IBM immediately began bringing his idea to fruition. Five years later, IBM rocked the computing world by releasing machines capable of indexing large bodies of text. The achievement made front page news.

While hash table is an appropriate name given the data structure’s internal workings, dictionary is a more suitable characterization based on the abstract interface. Just like a physical dictionary stores definitions retrievable via a word, hash tables store objects that are retrievable via an arbitrary key. There are three typical operations5: put(key, value), get(key), and remove(key). The put operation performs an upsert6, get returns the value associated with the supplied key, and remove deletes the key value pair. This is illustrated below. 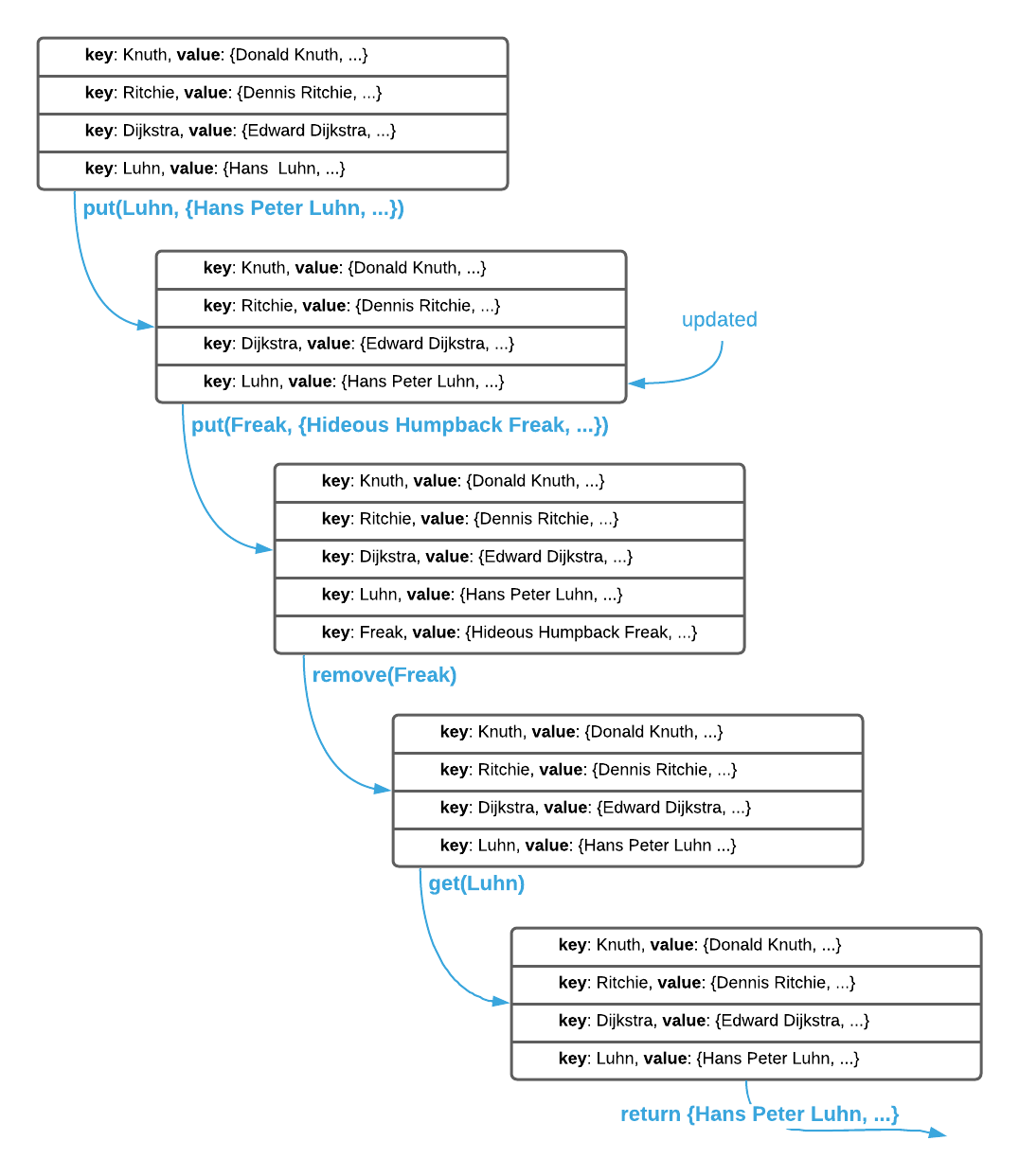 With a firm grasp on the abstract interface, it’s time to examine the internal workings of hash tables. There are three associated concepts: direct addressing, hashing7, and collision management. See the sections below.

Hash tables store data in arrays. Recall that arrays are contagious segments of memory that support direct addressing. That is to say, assuming a known ordinal index, the memory address of any item is easily calculable in constant ($\Theta(1)$) time. Going back to the example in the previous section, all of the data is stored in an array as shown below.

Assuming the knowledge that the key Richie is stored at index 1, it can be retrieved in constant time. Recall from the interface definition that the index is NOT known. The only information available to the algorithm is the key. How is it possible to divine the index given only the key? That’s where hashing comes into play.

Hashing literally means chop and mix together. A hash function8 accepts an arbitrary sized piece of data, chops it up, and commingles it into a fixed length value. In the case of a hash table, the value is an array index. See the image below.

To demonstrate, consider the naive hash function implementation defined in the succeeding pseudo code. There are a couple things to note. The first is that the choice of accepting a byte array is deliberate. Almost any value is convertible to a byte array so this function is capable of generating an index from almost any type of key. The second is that is uses an $\oplus$ (exclusive or aka xor)9 to “hash” individual bytes. In a nutshell, $\oplus$ deterministically scrambles the bits.

WARNING: Naive hash function is a purely pedagogical device aimed at simplicity. It is not suitable for real-world use.

To summarize, a hash table employs a hash function similar to this one to determine the array index in which to store\retrieve constituent data items. There is however a glaring problem with this implementation. A good hash function has the following proprieties:

The naive hash function satisfies property one but fails miserably at property two. The return value is derived from a single byte which has a max value of 255; therefore, output values will be clustered in that range. Stated differently, the distribution of output values generated from all possible input values isn’t highly varied. Some indices will occur frequently while others wont occur at all. See the image below. 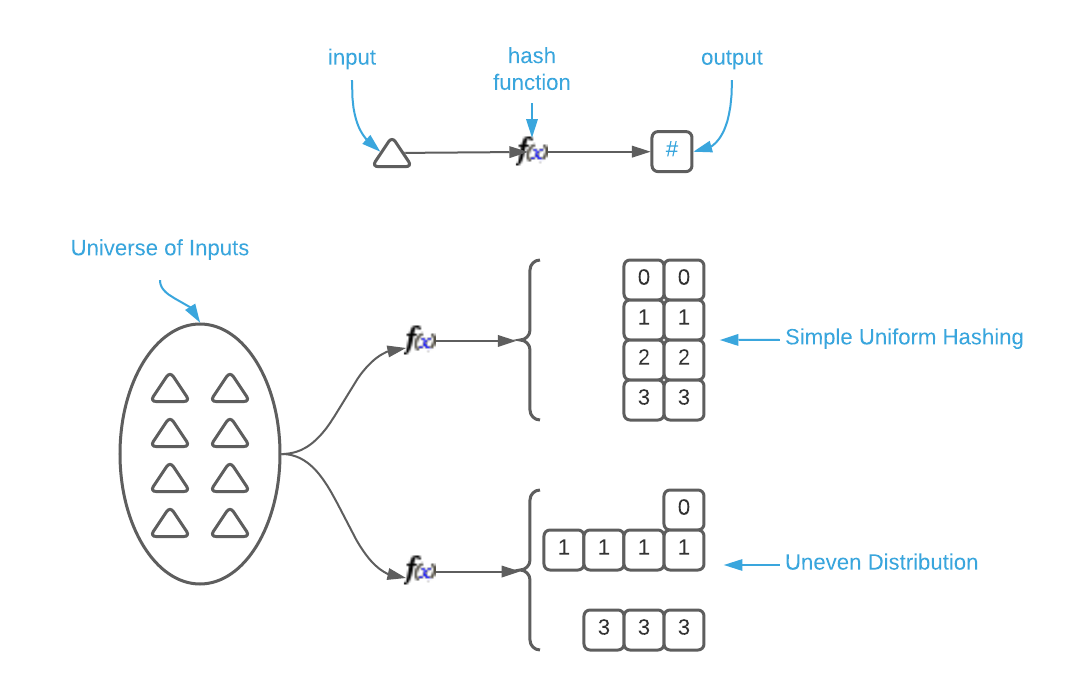 Another property of simple uniform hashing is that similar inputs must generate widely varied outputs. It’s reasonable to assume that a consumer will store tightly correlated keys in a hash table. It’s important that small key variations generate highly disparate indices. In other words, the keys foo and fop should not produce similar hashes.

Creating a good hash function requires statistics expertise and extensive testing. Luckily, there are several simple and effective non-cryptographic implementations freely available. For instance djb210, sbdm, FarmHash, MurmurHash3, and SpookyHash are some popular viable options. Using one of these hash algorithms will probabilistically reduce the likelihood of collisions. The following section explores the possibility of eliminating collisions.

This sub-section explores the first option.

Assuming one knows every possible key in advance and one has access to a sufficiently sized array, it is theoretically possible to eliminate collisions. Unfortunately, such a scenario is exceptionally rare and collisions are otherwise unavoidable. The proof of said fact is demonstrable with a single succinct thought experiment: the pigeonhole principle11. Given $x$ pigeonholes and $x + 1$ pigeons, it’s impossible to place all the pigeons in distinct pigeonholes. See the illustration below. 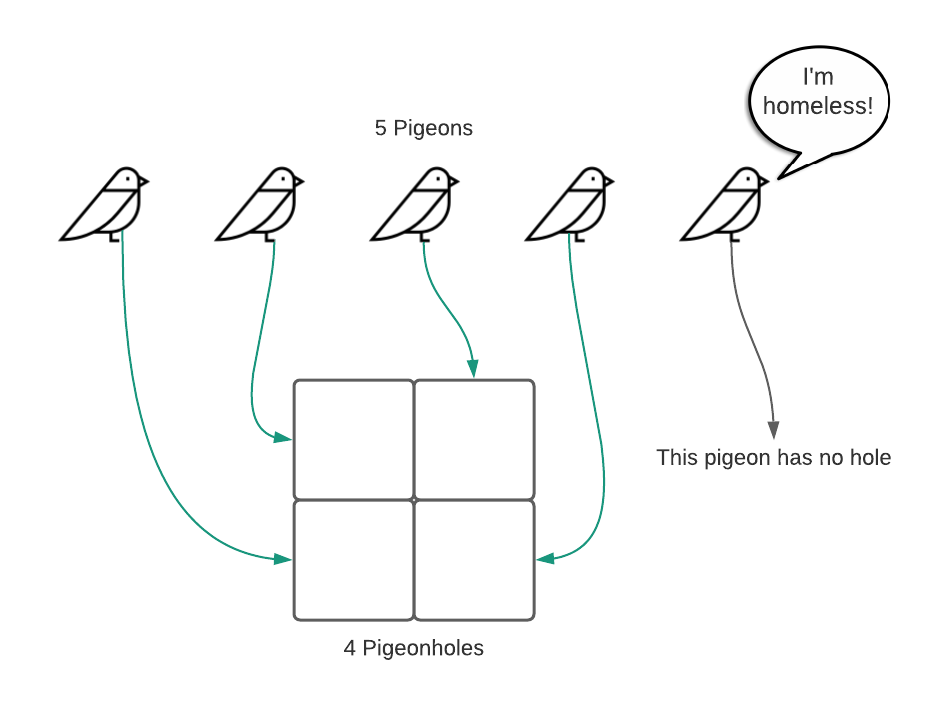 To demonstrate the relationship to hashing, imagine that an array index is a pigeonhole, a key is a pigeon, and a hash function accepts a pigeon and assigns it to a pigeonhole. Consider a hash table using keys constrained to 10 lower case letters. This equates to $26^{10}$ possible keys. Each key requires a distinct array location. Even if each array item is a mere 16 bytes in size, the total size of the array would be $26^{10} \times 16 \approx 2259 \space \text{terabyte}$. Obviously, this course of action isn’t feasible.

As mentioned in the previous sub-section, it is possible to probabilistically reduce the likelihood of collisions with simple uniform hashing. This is true; however, an actor with intimate knowledge of the employed hashing algorithm can create a pathological data set. A pathological data set is a collection of key values purposefully engineered to prevent even distribution of data. Stated differently, a data set specifically designed to generate a small set of output values given a large set of input values. As the pigeonhole principle illustrates, there will always be multiple input values that generate the same output value. Pathological data is always a possibility12.

The bottom line is that it’s theoretically impossible to generate unique indices from keys when the total possible number of keys is larger than the number of indices. Furthermore, the statistical likelihood of collisions is high. The only option is to manage collisions when they inevitably occur.

As established, collisions are unavoidable. The only option is to devise a way to map multiple items to a single array index. The most common remedy is chaining14, which is storing a linked list at each array item. The image below depicts a hash table with integer keys. The array has eight available slots and eight stored items. There were four collisions at index two, so four items are stored in that bucket. Locating an item in the hash table involves generating a hash, locating the desired linked list, and searching it.

The challenge of chaining15 is that performance degrades as the number of collisions increase. The larger the linked lists becomes, the more searching is required.

There are three implementation details that have impact on collision frequency.

They are explored in detail in the sub-sections below.

It goes without saying, the larger the array the lower the probability of collisions. A common metric for array sizing is load. Load is the ratio of the count of stored objects to the length of the array. In the chaining image above, the load is $1$ because there are $8$ stored objects and the array has a length of $8$. A rule of thumb is to keep the load below $0.7$. In practice, this means resizing the array and rehashing all the items when the load gets too high. Obviously, this is an expensive operation that should be avoided when possible. Choosing a suitable starting size that balances the cost of resizing with memory consumption is critical.

Much has already been said about hash functions in the hashing sub-section. Recall that simple uniform hashing reduces the likelihood of collisions so this is the highest concern. There are several freely available hashing algorithms to choose from, all of which have similar characteristics. Choose whichever is most convenient and available for your platform. It’s not recommended to “roll your own” hashing algorithm.

Hash functions typically return a number with a large range. For instance, FarmHash generates a 64-bit unsigned integer16 that has a range of $0$ to $18446744073709551615$ inclusive. The hash value must be further compressed into an array bound. This is depicted graphically below.

Compressing a hash value to an array index has implications on the distribution of array indices. There are two common compression techniques: division and multiplication.

The most common reduction method is known as the division method. If $h$ is the hash value and $m$ is the size of the array, the compression formula is $h \bmod m$. This works well is many cases. However, one has to carefully consider the value of $m$. Any common factors between the input keys and $m$ will result in a non-uniform distribution of data. The best way to mitigate this risk to ensure that $m$ has as few factors as possible; therefore, prime numbers are ideal.

The multiplication method is another means of compressing a hash into an array index. It is more complex but has the advantage that the array size is not critical to the distribution of data. The formula for the multiplication method is $\left \lfloor m(hA \bmod 1) \right \rfloor$ where $A$ is a constant, $h$ is the hash value, and $m$ is the array size. The value of $A$ can be anything between 0 and 1; however, Donald Knuth suggests that a good general purpose value is $\frac{\sqrt{5}-1}{2}$17.

In conclusion, making intelligent decisions for the three most important design considerations will ensure a performant hash table. Unfortunately, there is a great deal of nuance involved that is easy to overlook. Hash tables should not be implemented hastily. Properly implemented, hash tables allow for insertion, deletion, and search in constant time.