Bloom filters are conceptually similar to Hash Tables in that they both use hash functions to map keys to indices in constant time. They differ in that Hash Tables store/return a value associated with a key while Bloom Filters returns a boolean (yes or no) response indicating if a key has been previously inserted. In other words, they test if a key exists in a set. The general idea is that they accept a list of keys and “remember” them without the ability to retrieve, delete, or enumerate them. Imagine a spell checker application1 with the list of all known words inserted into a Bloom Filter. Executing a Bloom filter lookup on any word indicates if it is spelled correctly.

What is extraordinary about Bloom filters, aside from guaranteed constant time operations, is the scant amount of memory they require: as little as 8 bits per 32 or 64 bit key. The trade off to the speed and memory paucity is accuracy. Bloom filters are known as a space-efficient probabilistic data structures meaning that there is some probability of incorrect responses. Error rate, memory space, and performance act as balancing forces so engineers must choose the right combination for their specific application. This will be become more obvious after examining their internal workings.

A Bloom filter implementation has two primary components: 1) a list of hash functions and 2) a bit vector2. When a key is inserted, each hash function in the list computes an index between zero and the size of the bit vector. Next, the corresponding bits in the vector are set to one. This is best demonstrated with an example. Consider a Bloom filter that will hold the set of the names of our favorite computer scientists. There is a bit vector of size ten and a list of three hypothetical hash functions as depicted in the image below. The first name inserted is the venerable Donald Knuth. The initial hash function return seven, the second two, and the third five so these bits are set to one. When Edward Dykstra is inserted, the first function returns one, the second five, and the third eight. An important thing to note is that bit five is already set to one. In this case, no change is made to this bit. The only reason it is of note is to highlight the fact that different keys can “share” bits. 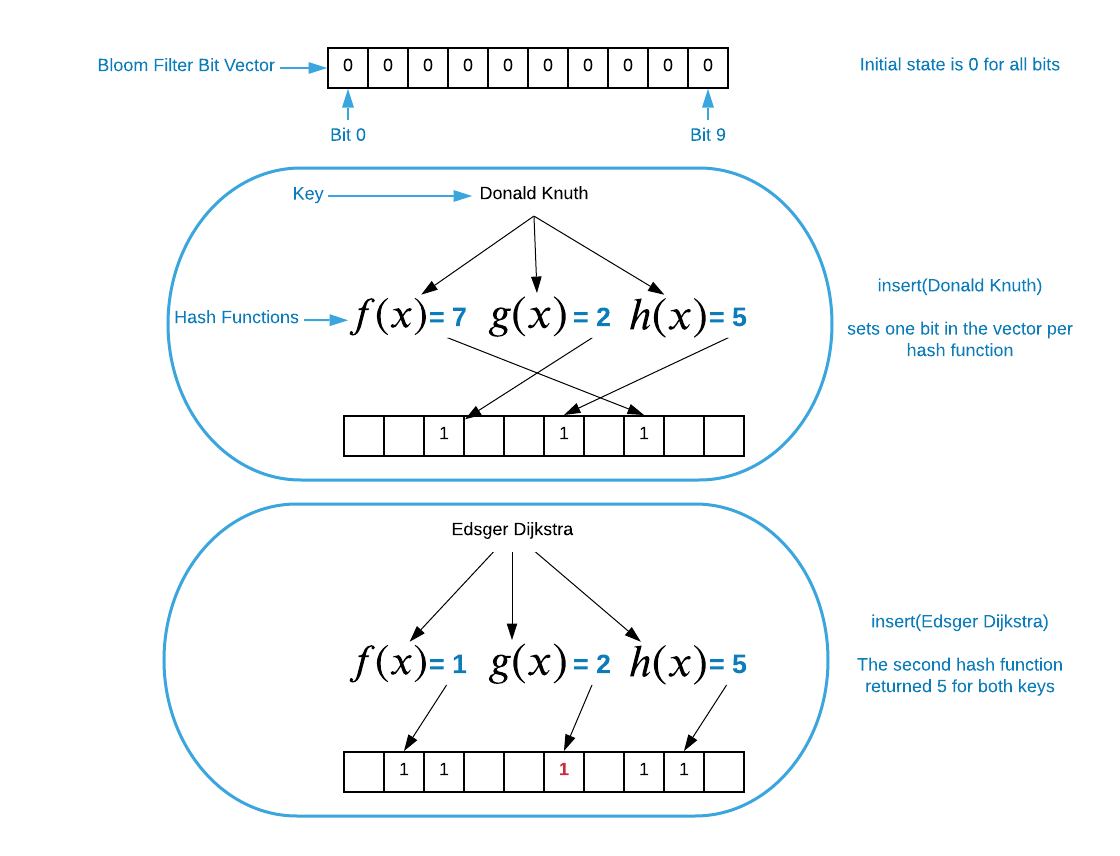 Looking up a key in a Bloom filter involves computing the index of each hash function and return yes if all the corresponding bits are one and no if any one of the bits is zero. As mentioned above, Bloom filters are a probabilistic data structure, so returning a definitive yes or no is somewhat of a misnomer. More accurate responses would be “definite no” and “highly probable”. Bloom filters will never return no for a key that was inserted. However, false positives (yes for a key that was NOT inserted) are a low probabilistic possibility. This image below graphically demonstrates Bloom filter lookups. The name Edward Dykstra was inserted in the previous example, so it makes sense that it return a “highly probable” response. The names Dennis Ritchie and John Von Neumann have not been inserted into the Bloom filter as of yet (obviously no list of computer scientist would be complete without them). Doing a look up on Dennis Ritchie results in “no” because the second hash function returns a three and this bit is set to zero. John Von Neumann demonstrates the dreaded false positive result. Even though the name does not exist in the data structure, it returns “highly probable” because all of the computed bits are set to one. The question now becomes, “just how probable are false positives”. 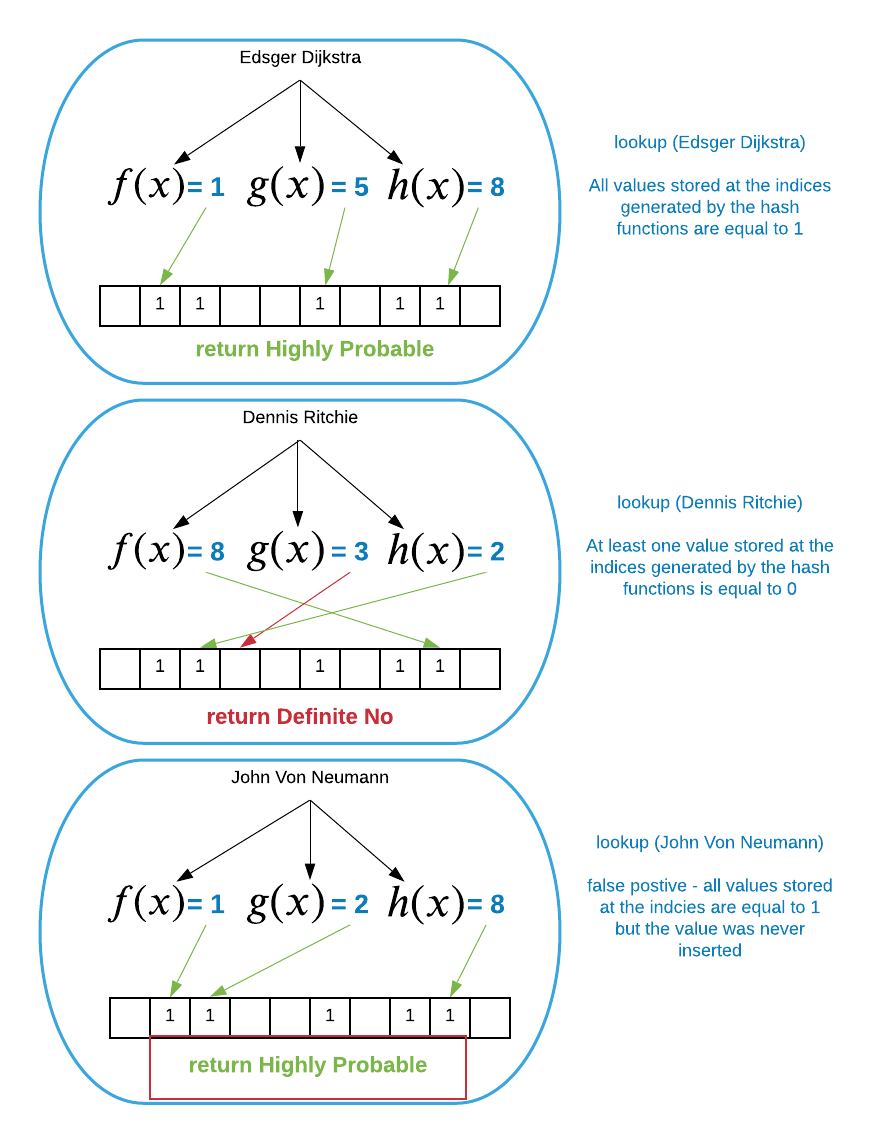 As alluded to earlier, it’s possible to tune the probability of false positives (error rate) by manipulating the number of hash functions (performance) and the length of the bit vector (memory space). Determining the correct balance for a specific application involves calculating a few formulas. The arcane details underlying the math below are out of scope (here is a good place for the curious to start). There are several Bloom Filter Calculators freely available on the internet that work wonderfully for the time constrained.

As an example, assume a Bloom filter with 50 items and a desired probability of false positives of 1% (.01). The size of the bit vector must be:

The final verdict is that in order to keep the probability of error under 1%, the bit vector must be at least 460 bits long and there must be at least 7 functions in the hash function list. It should also be noted that all of the constraints and recommendations concerning hash functions outlined in the Hash Table section also apply here. It is assumed that each hash function is capable of simple uniform hashing and indices are also evenly distributed between them. Failing any of these requirements results in a higher error rate.

In conclusion, Bloom filters are highly useful data structures for testing if objects belongs to a pre-defined set. The constant time operations and comparatively meager memory space requirement make them highly practical. On the down side, Bloom filters produce false positive results occasionally. Increasing space and performance requirements can reduce the error rate. Engineers should take special care to weigh the trade offs against the specific application’s needs.